Started in 2008, International Pillow Fight Day has been a yearly event since it was conceived of as a take-off from Fight Club. True to its roots, many of the worldwide locations are secret until just before the event, which also tends to keep the authorities from ruining the fun. Huge crowds come together in places like Trafalgar Square, the Washington Monument and Pershing Square in Los Angeles, CA. and well, have a huge pillow fight.

In the spirit of all this fun, we put together our best picks for pillow fighting pillows and made some fighters that might be the types to use each type of pillow. We encourage you to look through the 8 fighters and choose which one you like best. Then head over to our Facebook page and like, share or comment on your favorite fighter’s post. The 2020 International Pillow Fight Day is April 4th so get your pillows ready and find your local fight to have some good fun. 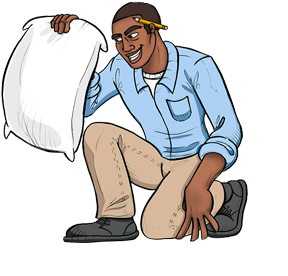 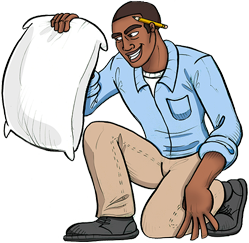 Darnell has it all figured out. Whether it’s his PC, camping stove or his girlfriend, he’s scoured the market and analyzed every option for performance durability and value. His pillow is no exception. Instinctively drawn to the engineered design of this Tria® pillow, he loves how the internal baffles keeps the down from shifting so his blows pack a punch (and provide good support) regardless of where they land. Lately he has been favoring his all-down Tria because it is so light and fluffy. But, he also has the cousin to the Tria, the Side by Side with a feather core and down perimeter for when he wants to pack a bigger punch (and support).

Don’t be fooled by Tiffany’s style and beauty. She would just as soon beat you into submission than let you so much as whack a hair out of place. The housewife turned power real estate agent never lists a house that isn’t beautiful and special. She knows comfort sells and when it comes to comfort, the more the better. She brings that same winning formula to the battlefield with the fluffiest down pillow on the planet: The Super Loft. And never one to limit her game, she wraps herself in the lightest yet fluffiest armor there is: a Super Loft down comforter. After a rousing pillow fight or closing a deal, she rewards herself by settling deep into her over-the-top Super Loft bedding. 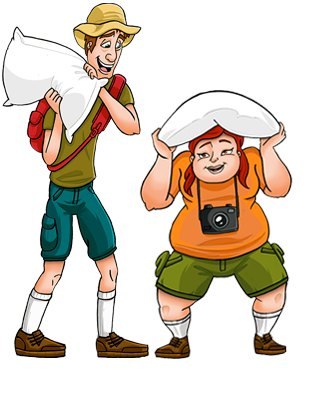 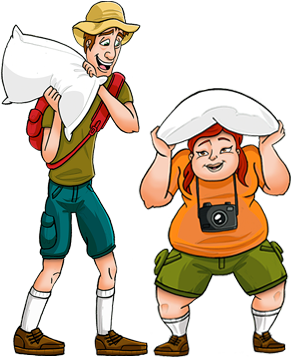 They say opposites attract, but Betty and Bob are more alike than they appear. Travel is their shared passion, and they love to compete on the international pillow fighting stage. A few years ago Bob had a blowout while practicing the night before the Yalong Bay Invitational. The manager at the Marriott jumped to the rescue and lent him a Double DownAround® Medium 2-pack, and they’ve never looked back. Per Betty, “The versatility is unequaled working well in all situations and for all types of competitors. Short, tall, forehand, backhand, side sleeper, back, you name it. It’s no wonder it’s the featured pillow in over 1 million hotel rooms.”

When Pam’s Olympic volleyball dreams were dashed because she was only 5’ 10”, she refocused on her second passion: the complex interaction of the human skeleton, ligaments and muscles. As an orthopedic surgeon she knows that a pillow that works with her, or as she says “fits” her, takes her game to the next level and keeps it there. She calls the more densely filled inner pillows her secret weapon. It looks like and feels cushy on the outside, but has a something extra on this inside. It doesn’t hurt that her Slumber Core’s unique inner chambers also provide extra neck support, holding her head and neck it the ideal alignment. After all, there are still league volleyball games to win. 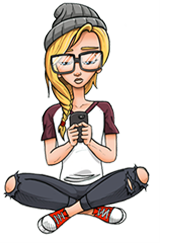 Do not even bother Hannah with a nickname. She is not into pillow fights. She’s only goes because her friends make her (and it provides great pics for Instagram). “Do you know how much effort it takes to actually swing a pillow at someone? And I would have to set down my phone.” Hannah’s strategy is simple. She builds a comfort-fort with the biggest resilient pillows she can find: Pacific Coast® feather and down Euro Squares. And she lines her fort, maybe it’s more a comfort-nest, with her heavenly Down-On-Top mattress topper. While sitting in her oasis within the surrounding chaos, she happily tweets and posts and watches her followers count grow. #pillowfight 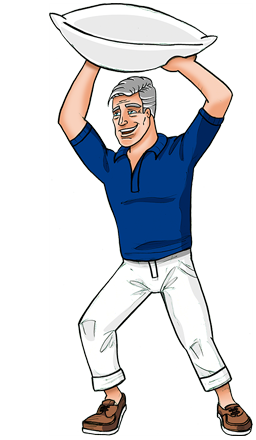 Chet is showing no signs of slowing down. But, at 65 he is ready to indulge in the finer things. He has earned it. Like his new 63’ Franchini sailing yacht, his pillow needs to be the best! For sure it has the finest appointments like 500 thread count cotton fabric and European white goose down. Most players would feel blessed to take a blow from that kind of luxury. But the StayLoft has more. It features the finest technology. Craftsmen have hand-sewn fabric baffles inside the pillow creating nine separate compartments. Like a perfectly trimmed sail capturing the wind, each baffle ‘contains’ just the right amount of down. The result is a pillow with consistent loft and perfect balance throughout. In battle, like in bed, it does not let him down. 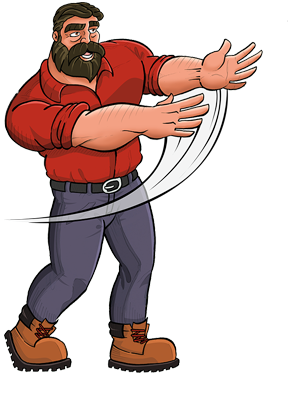 Buck is big. Not just tall. Big. So much so his friends call him “Blue”, a reference to Paul Bunyan’s famous giant ox. And similar to the legend of the lumberjack, Buck can clear a “forest” of pillow fighters with a single swing. After literally blowing through 100’s of ordinary pillows, he found a pillow as big and full as he: the Feather Best.

And here’s a little secret, for all his power, Buck is really a gentle soul. While bludgeoning his opponents, the last thing he wants is for them to get poked by a feather quill. The Feather Best’s patent pending design not only masks the feathers, it even has an extra touch of softness with its extra cuddly cotton shell. Ahhh. 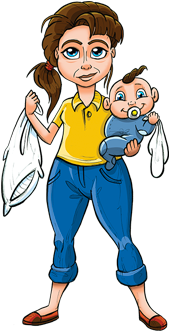 Sue is all about her 3 kids. She may seem a bit harried, but her small frame packs a punch. She is a defense-first fighter and that isn’t limited to blows from another’s pillow. She wants her weapon and shield to start allergy and chemical free. So it’s all natural Hyperclean® Down & Feathers to start. But she’s not stopping there. Her AllerRest Double DownAround stays allergen free to protect her team from all the dust, dirt and allergens that swirl around the battle field (and bedroom). Now if they would only come up with something like this for her minivan.

“You kids get back here and pick up your shoes!